Mountaineer Country’s ecodiversity–high mountain bogs, forests of various ages, abundant farmland, and waterways–makes for great birding year round. The breeding season of April through May is the most predictable time for rewarding birding. Often, weather fronts stall migrating waterfowl in their journey from early November through March, and large numbers may be seen on ponds, rivers, and impoundments.

Spring and fall migrants not normally seen in summer and winter (except when lakes and rivers are unfrozen) include Tundra Swan, Wood Duck, American Black Duck, Bufflehead, Ring-necked Duck, Hooded Merganser, Common Loon, and Pied-billed Grebe. A few songbirds such as Hermit Thrush and Cape May and Blackpoll Warblers also pass through twice a year. 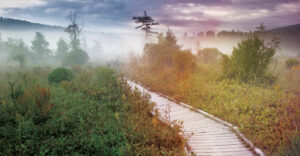 This is a relict wetland complex supporting northern plants and animals at a southern latitude. The Nature Conservancy owns more than 300 acres in the Cranesville Swamp Nature Sanctuary. A boardwalk provides access to the mountain bog habitat and the area surrounding it is open to the sky. Bird life in the swamp is varied depending on the season and weather. High elevation species include Blue-headed Vireos, Black-throated Blue Warblers, Black-throated Green Warblers, American Redstarts, Northern Waterthrushes, Canada Warblers, and Dark-eyed Juncos. Other fairly common birds include Ruffed Grouse, Wild Turkey, Green Herons, Yellow-billed Cuckoos, Red-bellied woodpeckers, Downy Woodpeckers, Gray Catbirds, Swamp Sparrows, and Indigo Buntings. Be on the lookout for birds of prey including hawks, falcons and owls. 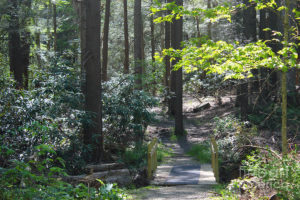 Cathedral State Park is an ancient hemlock forest of majestic proportions, and one of the last living commemorations of the vast virgin hemlock forest which once flourished in the Appalachian highlands. Trees up to 90 feet in height and 21 feet in circumference form cloisters in the park. The park is maintained by the State of West Virginia as a natural area, to provide habitat for birds and wildlife. Birds that may be found in the park include Eastern Screech Owls, Barred Owls, Blue-headed Vireos, Hermit Thrushes, Wood Thrushes, Northern Parulas, Magnolia Warblers, Black-throated Blue Warblers, Black-throated Green Warblers, Canada Warblers, Scarlet Tanagers, Dark-eyed Juncos, Rose-breasted Grosbeaks and Baltimore Orioles. Website: www.cathedralstatepark.com 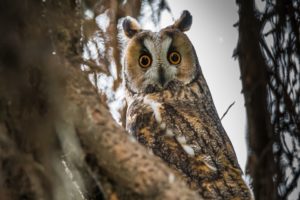 Situated in a mountain valley between Chestnut Ridge and Laurel Ridge on the western edge of the Allegheny Mountains, Upper Decker’s Creek provides a mix of marsh, ponds, fields and deciduous growth. This habitat provides feeding areas for shorebirds, raptors, migrating waterfowl and waders. The area boasts some of the best birding in the Northern Alleghenies. Some of the rarities that have been spotted here include Greater White-Fronted Geese, Snow Geese, Wilson’s Phalaropes, Pacific Black Brants, Caspian Terns, Forster’s Terns, Long-eared Owls, Short-eared Owls, Nelson’s Sharp-tailed Sparrow, Lapland Longspurs and Snow Buntings. On a good day, more than 100 species of birds are possible at Upper Decker’s Creek. 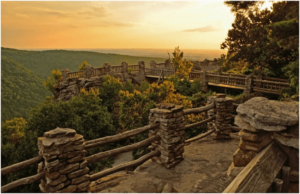 Location: Off of Interstate 68.

Cooper’s Rock State Forest is 12,713 acres bisected and although the forest serves as a recreation and preservation area, it also serves as areas of publicly owned land for forestry research, timber management, and watershed and wildlife protection. Website: www.coopersrockstateforest.com

Bands of rock cliffs line the Cheat River Gorge and provide numerous overlooks. The centerpiece among these is the main overlook, which furnishes a panorama of the gorge and distant horizons. A maze of enormous boulders and cliffs fascinates hikers, and the trails are especially lovely in June when the rhododendron and mountain laurel are in bloom. Several trails wind through forest valleys and over ridges, and a number of creeks beckon the explorer. Glade Run is dammed to form a 6-acre pond that is regularly stocked with trout. The observant hiker can hear and sometimes see squirrels, chipmunks, hawks, owls, turkeys, turkey vulture, songbirds, fox and deer throughout the forest. 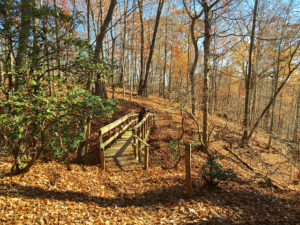 Location: On the Evansdale Campus of West Virginia University

The 91-acre Core Arboretum is mostly old-growth forest on steep hillside and Monongahela River floodplain. Approximately 3.5 miles of trails provide access to densely wooded areas and 3 acres of lawn planted with specimen trees. Many local birders visit the Arboretum during spring migration to see as many as three dozen species of warblers as well as other neo-tropical migrants. Nearly 200 species of birds have been observed since it opened to the public in 1954. Warblers, Hermit and Swainson’s Thrushes, Great Blue Heron, Woodpeckers, Eastern Wood-Pewee, Acadian Flycatcher, Gnatcatcher, Wood Thrush, Gray Catbird, Yellow-throated and Prothonotary Warblers, Eastern Towhee, White-throated Sparrow, Dark-eyed Junco, Scarlet Tanager, Northern Cardinal, and Indigo Bunting. (Guided tours are held the last week of April and the first week of May, e-mail: [email protected] or call (304) 293-5201 ext. 31547 for more information about bird walks and group tours) 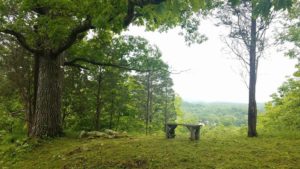 The 270-acre Mason Dixon Historical Park is jointly owned by Monongalia County, W.Va., and Greene County, Penn. With a wide variety of terrain and elevation, visitors are encouraged to pick up park brochures and trail maps at the park’s big red barn. Although the park is mostly wooded, a large meadow and wetland area around Dunkard Creek provide diverse habitat that attracts birds throughout the year. However, the warmer seasons bring great birding opportunities to this park. The meadow behind the barn is an ideal spot for American Kestrels, Barn Swallows, Eastern Bluebirds, and Eastern Meadowlarks. 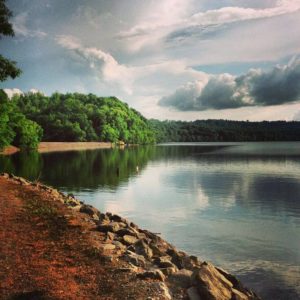 The south end of Cheat Lake is primarily of interest during spring, fall, and early winter waterbird migration. The best vantage points—all on the east side of the lake–are at Sunset Harbour Marina, directly under the east end of the I-68 bridge, and near the marinas south of I-68. Both Barn and Cliff Swallows nested under the bridge until its recent repainting. 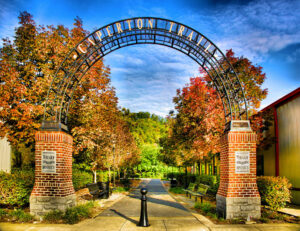 A former railroad right-of-way along the east bank of the river stretches from the Pennsylvania state line 29 miles south to Prickett’s Fort State Park north of Fairmont. Several miles through downtown Morgantown are paved and called the Caperton Trail.

The best areas are stretches north and south of the end of Van Voorhis Road, from Edith Barill Park in Star City south to the Morgantown Utility Board wastewater treatment plant; the stretch through the Core Arboretum, from Morgantown Lock and Dam north to the Route 19 bridge just north of Hazel Ruby McQuain Park; and north and south of the Uffington access area near the I-79 bridge. About 110 species have been seen between Van Voorhis Road and Uffington.

During late fall and winter, the Dam-McQuain Park stretch may be the only unfrozen part of the river and is a concentration point for Canada Goose, American Black Duck, Mallard, Bufflehead, Common Goldeneye, Hooded Merganser, Pied-billed and Horned Grebes, American Coot, and Ring-billed Gull. Bald Eagle, Osprey, and Double-crested Cormorant are seen occasionally along the river at any time of year. 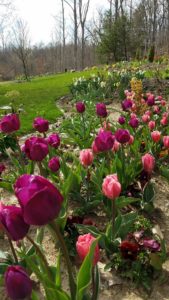 This hidden gem is primarily composed of an old mostly-dried up reservoir fed by streams through a small shrubby marsh and heavily forested areas. These are traversed by several miles of trails; the wetlands have a short boardwalk. 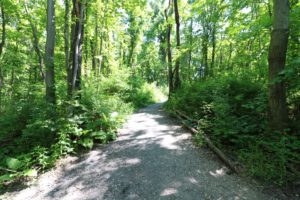 This 170-acre park on Morgantown’s south side, where about 65 species have been seen, contains five miles of trails in two separate sections of interest to birders. The section south of Mississippi Street west of the Morgantown Ice Arena contains a modest-sized reservoir where Canada Goose and Mallard breed; Great Blue and Green Herons and migrating Solitary Sandpiper have also been seen.

The bordering forest is home to many woodpeckers, Acadian Flycatcher, Yellow-throated and Red-eyed Vireos, and in fall and winter Yellow-rumped Warbler and White-throated Sparrow. The section north of the athletic fields along Hite Street also hosts Yellow-rumps, White-throats, and Dark-eyed Junco in fall and winter, and is home year-round to Red-shouldered Hawk and common woodland birds such as woodpeckers, Carolina Wren, Eastern Bluebird, and Northern Cardinal. Migrants include Ruby-crowned Kinglet, Cedar Waxwing, and Black-throated Green Warbler. Website: www.boparc.org 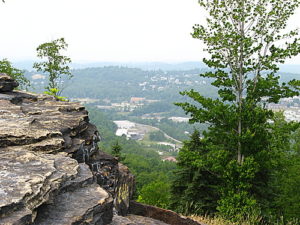 Located on one of the highest points in Morgantown, this 70-acre city park has several miles of hiking trails through mountaintop fields and woods, and there is a wonderful panoramic view of Morgantown and the Monongahela River Valley from atop the Sky Rock, its highest point. It is a popular stopover for migrating songbirds and many nest there as well.