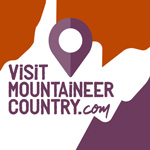 Rowlesburg, WV was the point at which the B&O Railroad crossed the Cheat River. It was a critical railroad link for the Union Army during the Civil War. Its famous bridges were a high-priority target of both Confederate President Jefferson Davis and Commander of the Army of Northern Virginia, General Robert E. Lee.

Battle of Rowlesburg on Cannon Hill

On April 26, 1863, Union soldiers and Rowlesburg citizens held back around 1,000 Confederate troops from destroying the town’s bridges and cutting off a main supply for Union soldiers.

Civil War Trail signs describe the action here on April 26, 1863, when Confederate General William E. Jones came to the area aiming to destroy the B&O Railroad bridge. If this bridge over the Cheat River were destroyed, it would have disrupted the critical East-West rail traffic, vital to Union war efforts in the East. An alert resident spotted Jones’s troops coming for the bridge. There were 250 Union soldiers in the town this Sunday morning when John Wheeler broke the tranquility by running into church services to warn of Confederate troops of more than 1000 soldiers moving near.

After the news from John Wheeler, Rowlesburg citizen Peter Wotring hauled cannons to the top of what would later be known as Cannon Hill with his team of oxen. There is a 45-minute walking tour of the site where the rough pattern of Wotring’s road is still discernible today.

Cannon Hill offers a panoramic view of Rowlesburg (one of the reasons it was fortified to protect the main line of the B&O Railroad,) so don’t forget your camera!

This action was part of the month-long Confederate Jones-Imboden Raid along the railroad. The 1,100-mile raid resulted in the destruction of more than 20 bridges and the capture of more than 700 Federal troops. Rowlesburg was the only town or outpost in western Virginia that was a principal target of the raid to stand up to the Confederate onslaught and emerge unscathed.

At the site of the former Cheat River Covered Bridge, located on 7 Islands Road, Aurora, is a trail sign marking the April 27, 1863 raid by General Jones. The Cheat River Covered Bridge was designed by famed bridge builder Louis Wernwag and built in 1835 for the Northwest Turnpike Company by Josiah Kidwell. Two thousand Confederate troops under the command of Gen. William Jones crossed the bridge, after which they removed the flooring out of one of the lanes. The wood flooring wasn’t replaced until after the war. In 1932, a new 3-span steel bridge was started nearby and by 1934 the old bridge had closed to traffic. It stood as a West Virginia state relic until it was destroyed by fire on May 23, 1964.

Another detachment from Jones’s raiders approached the Cheat River and the covered bridge here, hoping to approach the town from another direction. Both of Jones’s columns failed and moved on toward Fairmont.

The original Cheat River Bridge stood throughout the Civil War due to valiant efforts of the undermanned Union regiment stationed in Rowlesburg. A determined resistance by regular Union troops and townsfolk saved the bridge.

The original bridge crossing the Cheat River was built in 1852. It has been replaced several times with steel bridges, first single track and then double. The bridge was washed out in the flood of 1985. You can find a model of the Cheat River Bridge at the Szilagyi Center at 46 Center Street, Rowlesburg.

Additionally, the bridge attacked by General Jones and his Confederate Raiders in 1863 has been replicated for viewing at The Rowlesburg B&O Depot and Museum at 42 Poplar St, Rowlesburg.

the final resting places of Union and Confederate soldiers

Continue on to Kingwood where, in the Pleasant Grove Cemetery, you’ll find the gravesite of William McPeck, a veteran Union soldier of the 3rd West Virginia Infantry. McPack stood guard outside Ford’s Theater on April 14, 1865, the night that President Lincoln was assassinated. McPeck ran inside when he heard a shot and was one of the people who carried Lincoln to a private residence across the street. His tombstone reads “His Spirit Gone To the Unknown Land Where He Helped Usher That Of The Martyred Hero Abraham Lincoln.”

Find the burial sites of other Civil War soldiers here.

James A. Brown, one of two men from Preston County who voted to stay with the Union, built this Civil-War era home.

Brown constructed the home, now known as The Preston County Inn, at 112 West Main Street, Kingwood as a wedding gift for his bride. After only a year, his wife contracted smallpox and soon died. Brown became a Victorian mourner and would not allow anything belonging to his wife to be touched. Even her sewing remained as she left it, needle in cloth and thimble nearby. Much of the home has been restored to its original condition with Civil-War memorabilia on display. Guest rooms were added in 1948 as a way to experience history firsthand.

The Hole on High Street, Morgantown

The building at 301 High Street, constructed in 1852, houses a civil war prison in its cellar that held Confederate soldiers.

At the northwest corner of High and Walnut streets is the Berman Building, built in 1852. In the bowels beneath Dirty Bird is what’s left of a jail said to have housed Civil War prisoners during the 1863 raid on the city. With a flashlight, it’s possible to identify at least one wooden cell and another two sets of bars. There is no sign marking the Rebel Jail and exploring under the Berman Building today is by permission only.