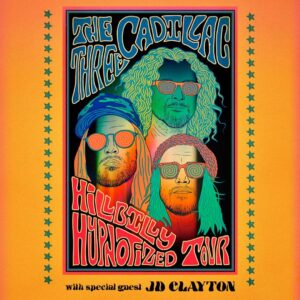 Drusky Entertainment presents… The Cadillac Three!The Cadillac Three, originally known as The Cadillac Black, is an American Southern rock group consisting of Jaren Johnston, Kelby Ray, and Neil Mason. All three members were originally in the band American Bang. The group has released three albums through Big Machine Records and has charted three singles on the Hot Country Songs and Country Airplay charts. In addition to their own work, Johnston has written singles for Keith Urban, Tim McGraw, Steven Tyler, Dallas Smith, and Jake Owen. Known across the globe for their unpredictable concerts – equally impressive and amped in a sweaty club or festival main stage – The Cadillac Three delivers an absolutely unforgettable experience.