What Makes Fireworks Red? (And All Other Colors)

understanding the science behind the spectacle

Do you know how fireworks were invented? The accidental discovery of gunpowder approximately 2000 years ago led directly to its invention. Legend tells of a Chinese cook who accidentally spilled saltpeter, a common flavoring salt of the time, into a cooking fire, producing an interesting flame. Saltpeter, mixed with the charcoal and sulfur from the fire, formed gunpowder.

During the Song dynasty (960-1279), a Chinese monk realized that the saltpeter exploded if it was enclosed in a bamboo tube and then ignited.

Many people associate fireworks with Independence Day, but their original use was in Chinese New Year’s celebrations to scare away evil spirits. Much of the modern focus of fireworks is on light and color, but loud noise (known as “gung pow” or “bian pao”) was desirable in religious fireworks, since that was what frightened the spirits. By the 15th century, fireworks were a traditional part of other celebrations, such as military victories and weddings.

Many fireworks are made in much the same way as they were hundreds of years ago, containing a shell, an explosive, and a fuse. However, some modifications have been made. Modern fireworks often include designer colors like salmon, pink, and aqua that weren’t available in the past.

Each firework is packed with special chemicals, mainly metal salts and metal oxides, mixed in just the right amount. When heated, the atoms of each element in the mix absorb energy, causing its electrons to rearrange from their lowest energy state to their higher “excited” state. As the electrons plummet back down to their lower energy state, the excess energy gets emitted as light. Each element releases a different amount of energy, and this energy is what determines the color of light that is emitted. 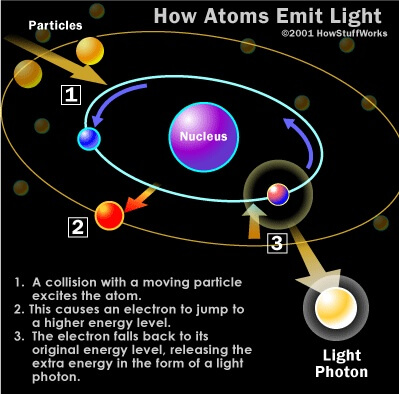 This mixing of chemicals was first incorporated during the Italian Renaissance when steel and charcoal were added to fireworks produce yellow and orange. Gradually, pyrotechnicians experimented with different metals like strontium, which gives us the color red, barium, which gives us green, and copper, which gives us blue. Combinations of these and other metals produce the range of colors you see in a professional fireworks display. Just like paints, mixing the ingredients of the primary-color relatives makes secondary colors. A mixture of copper (blue) and strontium (red) makes purple. 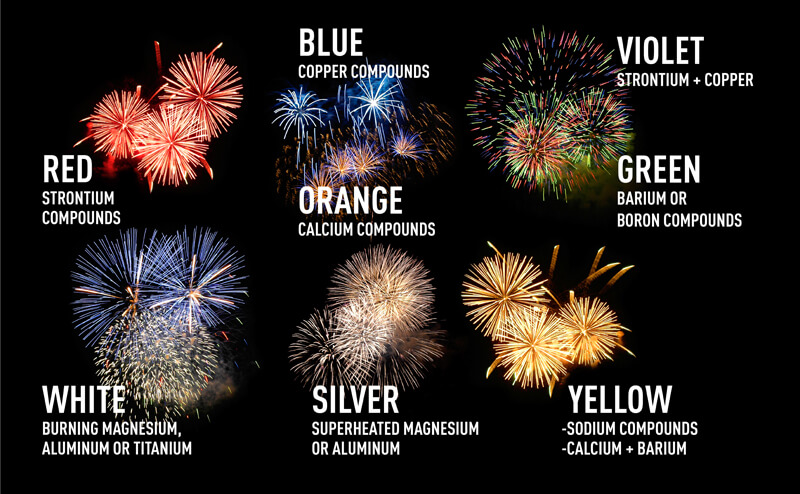 Fireworks will follow the WV Black Bears vs. Auburn ball game on Saturday, July 2 at the Monongalia County Ballpark. Come celebrate America’s independence with one of its favorite pastimes.

Bring a blanket and watch fireworks at dark at Terra Alta Park on Sunday, July 3, part of the Old-Fashioned 4th of July in the Park celebration.

On Monday, July 4th, bring the whole family out to enjoy Zambelli fireworks over the Monongahela River. Morgantown’s Independence Day celebration will take place at the Hazel Ruby McQuain Riverfront Amphitheatre at 10 p.m.

But before then, test your firework knowledge!