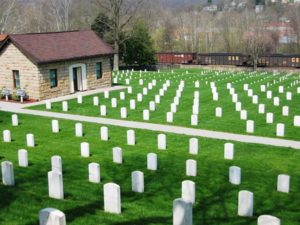 Grafton National Cemetery is located in Grafton, West Virginia, near the banks of the Tygart Valley River, approximately 25 miles south of Morgantown.  The cemetery contains burials of United States veterans of every conflict from the Civil War to Vietnam.  The steep slope of the terrain requires terraced grounds, giving the cemetery one of the most distinctive landscapes of any Civil War-era national cemetery.

The national cemetery opened in 1868 in order to provide a burial ground for Union soldiers who died in West Virginia’s military hospitals and battlefields.  The Federal Government selected Grafton as the site of the national cemetery for its proximity to the Maple Avenue Cemetery, which already contained the remains of many Civil War veterans.  On June 14, the first governor of West Virginia, Arthur Boreman, officially dedicated the cemetery.

The cemetery contains more than 2,100 interments, including 1,252 Union soldiers. 613 Civil War soldiers are buried as unknowns and their graves are identified with six-inch square marble markers.  The earliest burials came from Clarksburg, Wheeling, and Rich Mountain, and sites in Fayette, Marion, Kanawha, and Grant Counties, as well as eastern Kentucky.  They are interred in the lowest two terraces.  The dead buried at Grafton National Cemetery—now closed to new interments—represent more than 30 West Virginia counties and 24 states.

The three-acre site is roughly square, and consists of three terraces descending from the main entrance along Walnut Street.  A central walkway and staircase leads from the entrance, running the length of the cemetery, dividing the grounds in half.  At the middle of the cemetery, along the central axis between Sections C and D, is the flagpole.  A three-foot tall stone wall encloses the entire grounds.

At the southwest corner of the cemetery is the superintendent’s lodge.  The 1½-story stone building topped with a gabled roof was completed in 1900, replacing the original lodge designed by Quartermaster General Montgomery C. Meigs.  The Meigs lodge remained onsite until 1957.

Along the east and west walls of the cemetery is space set aside for memorial markers to honor soldiers and sailors lost at sea, or whose remains have not been recovered.  A plaque located just west of the flagpole bears text from the 1875 Act of Congress authorizing “preservation and maintenance” of the cemetery, and two plaques on the lowest terrace contain stanzas from Theodore O’Hara’s poem “Bivouac of the Dead.”